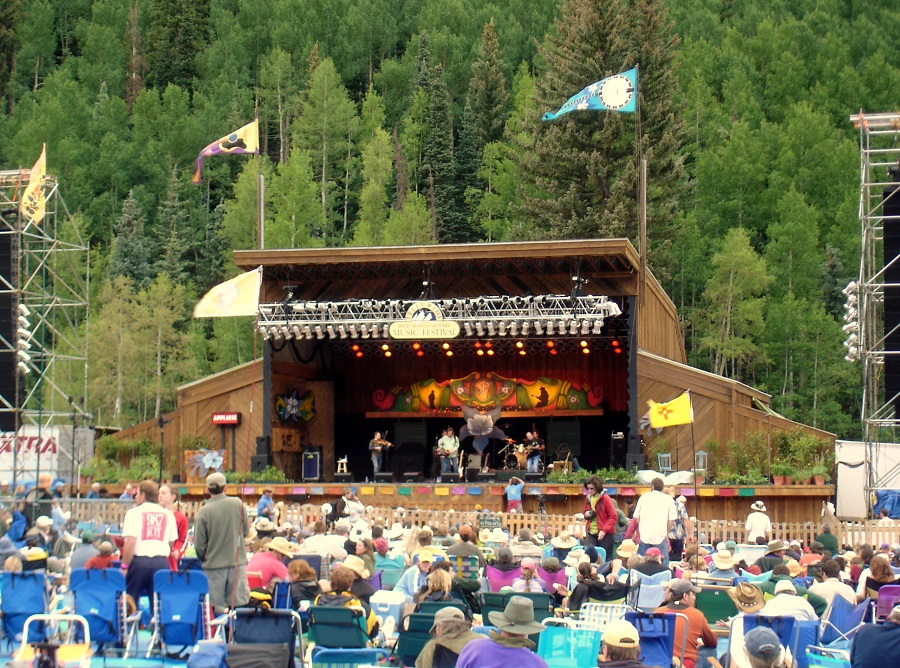 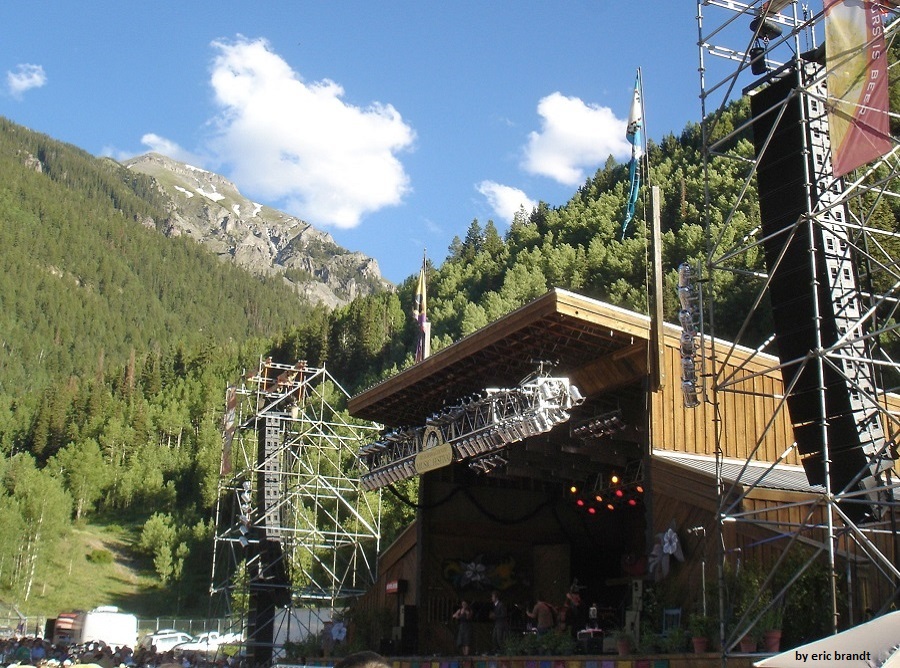 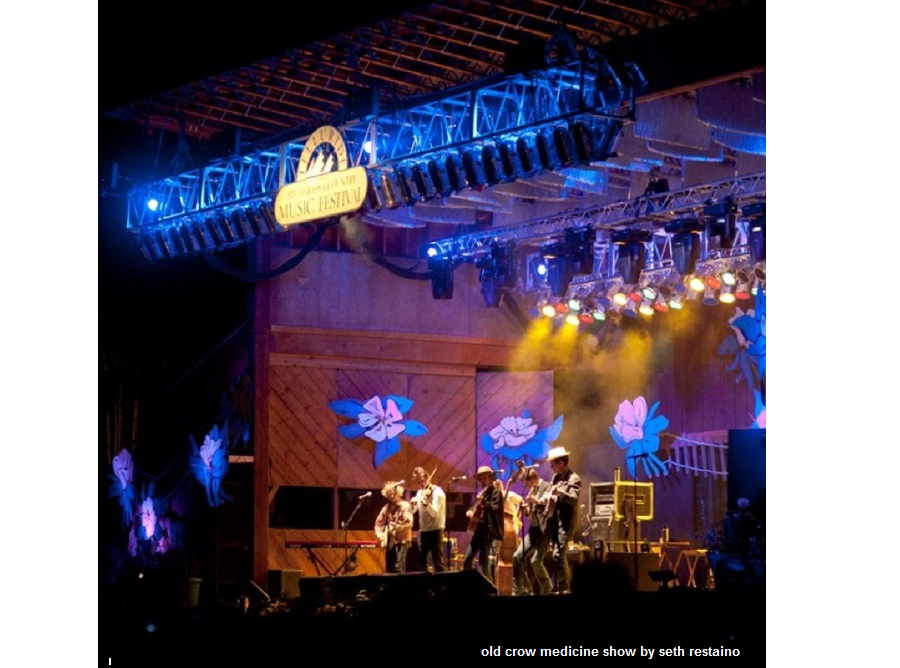 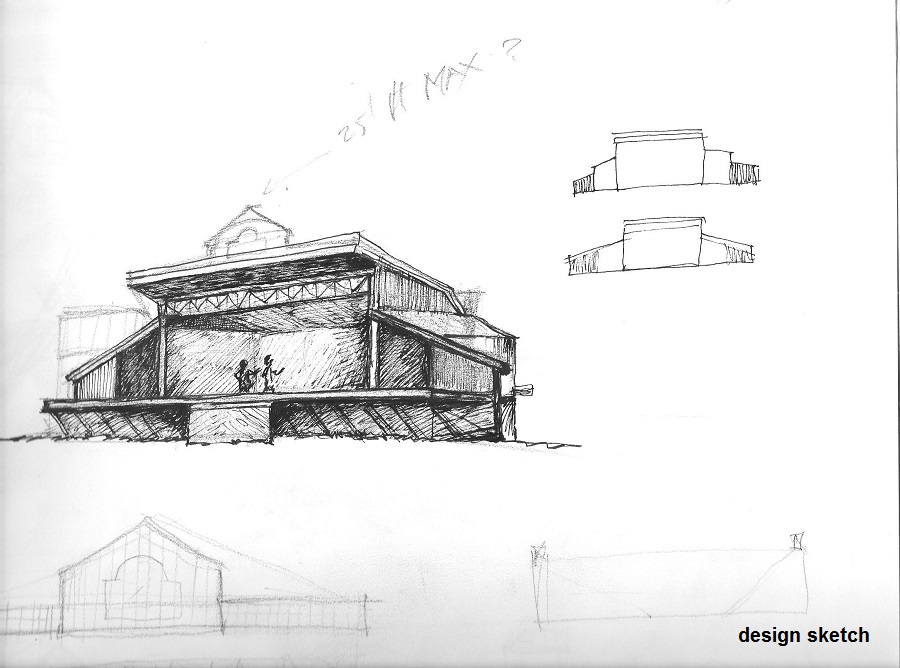 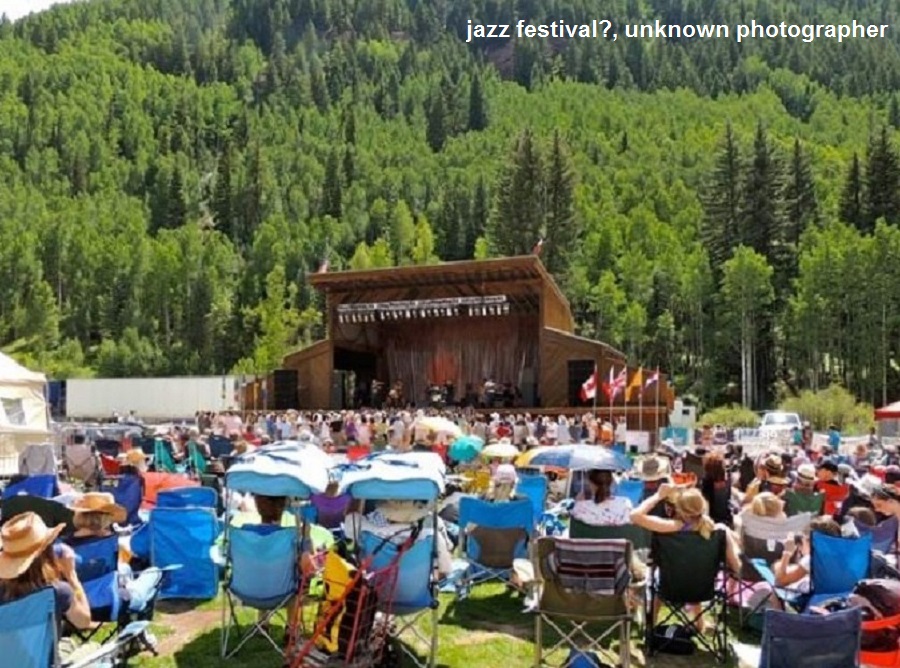 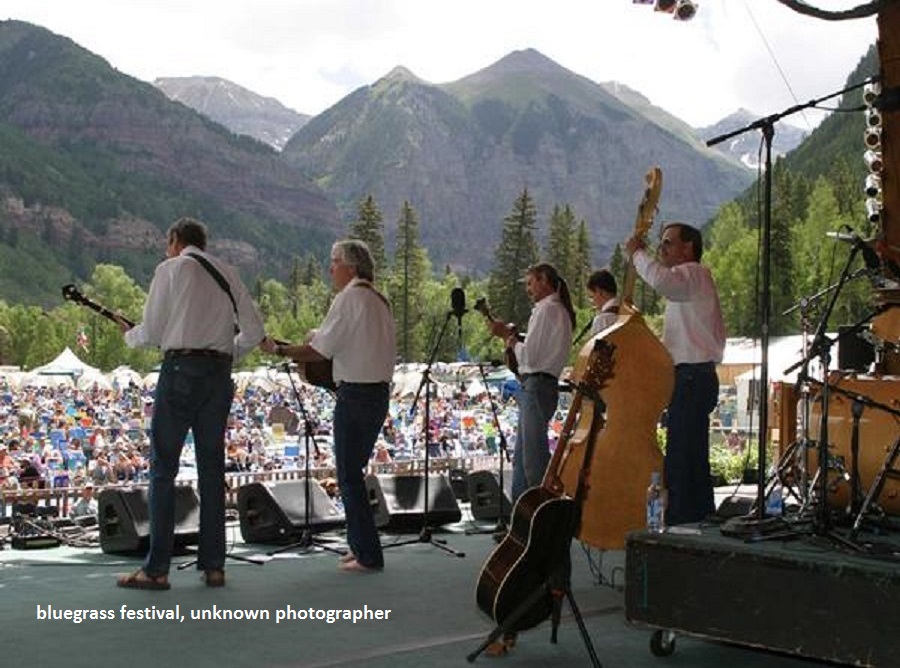 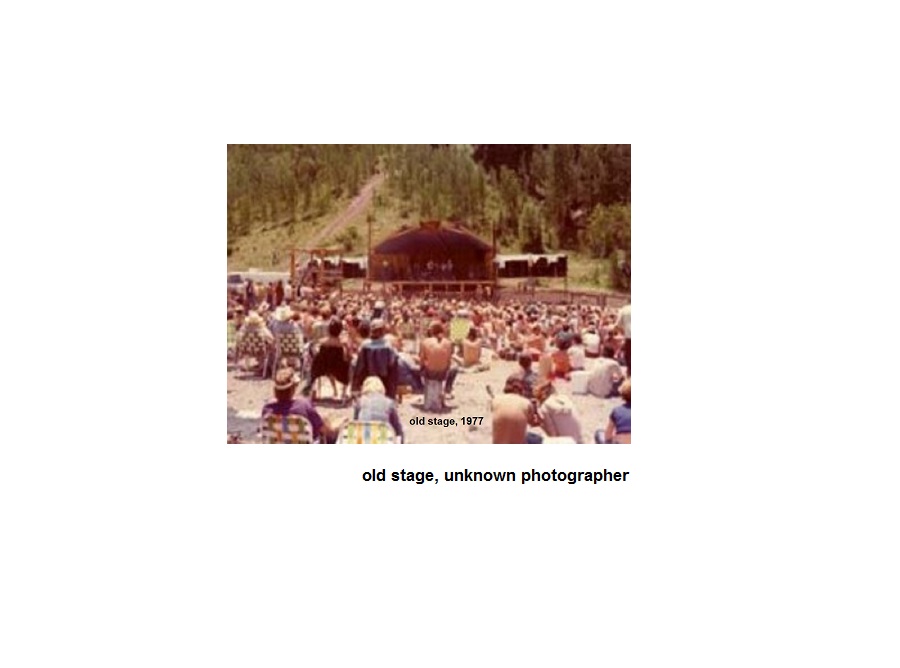 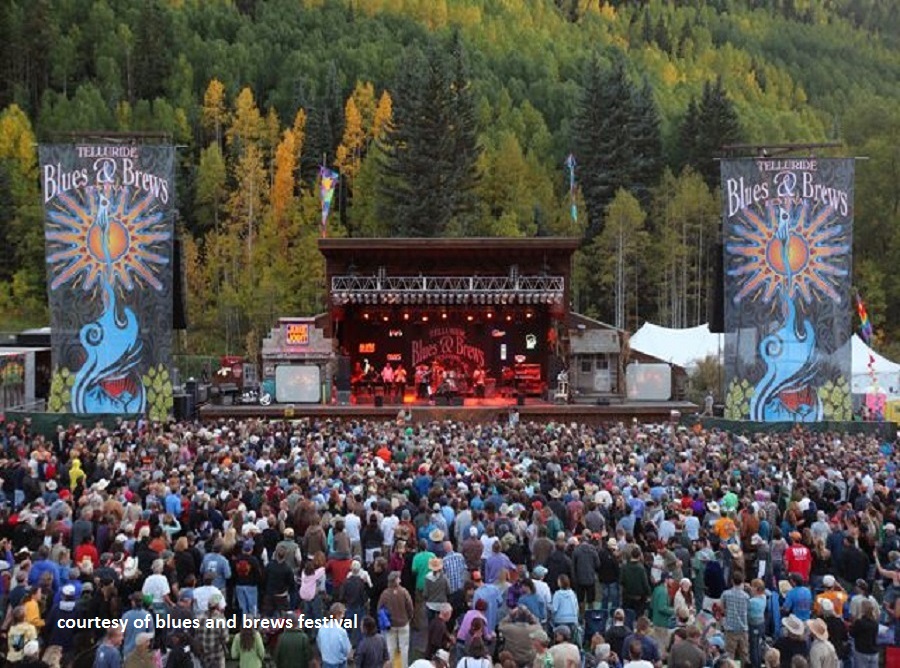 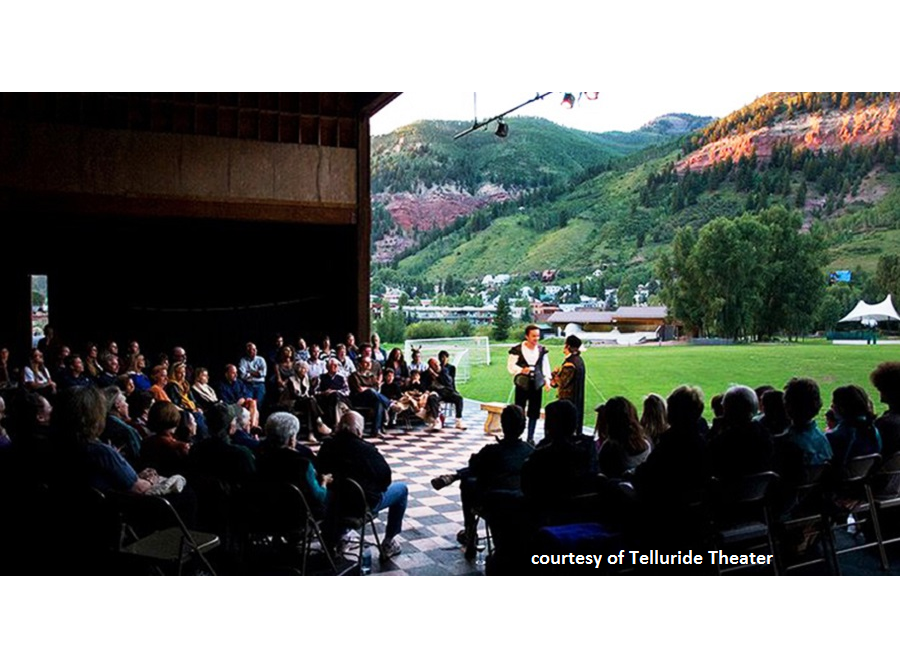 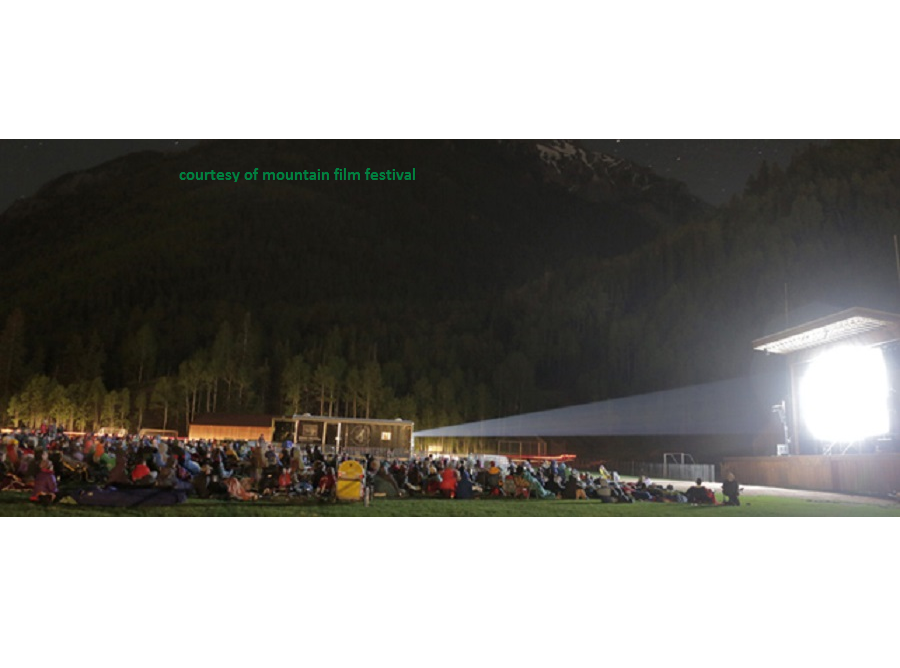 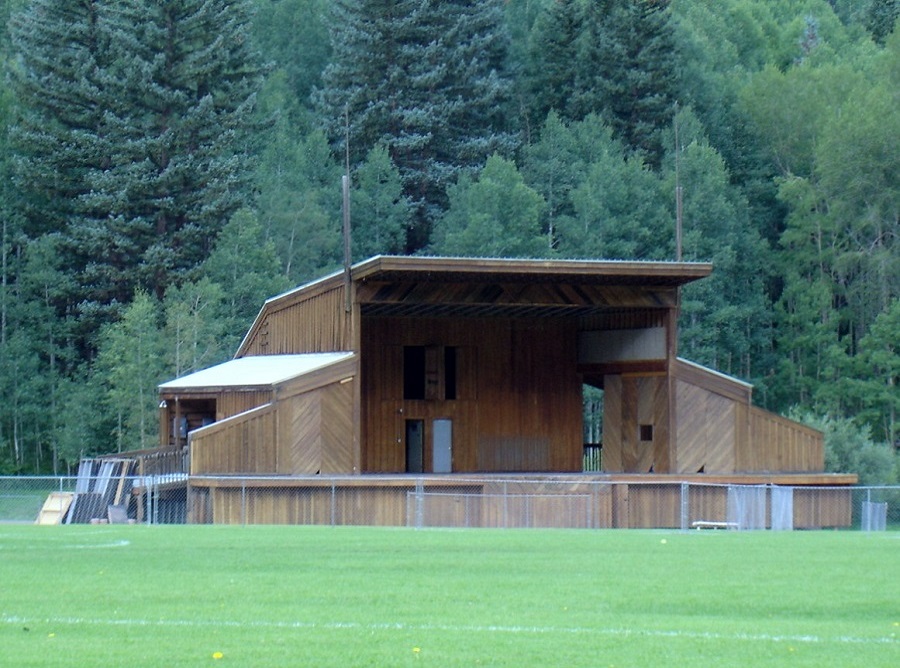 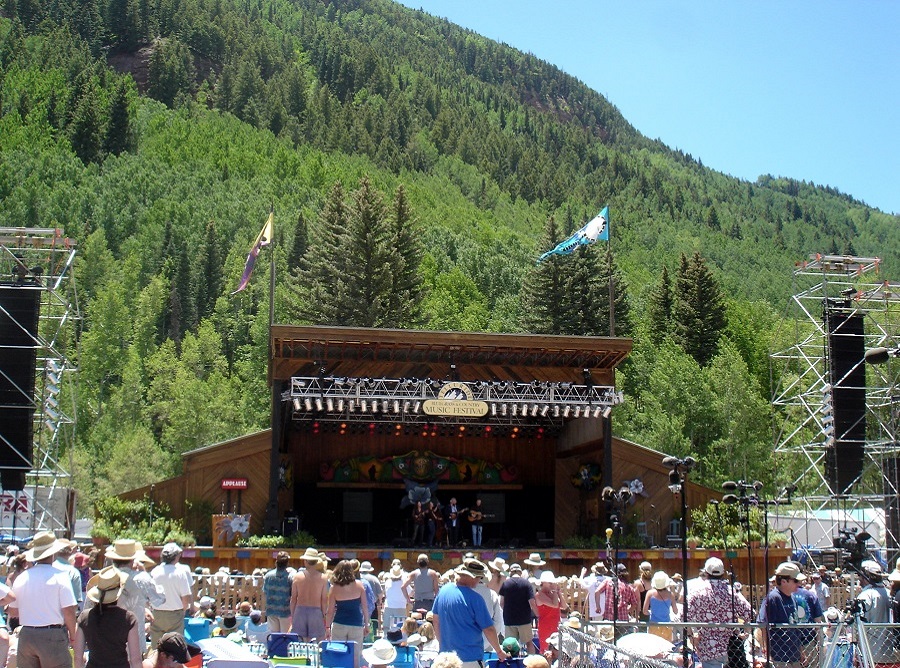 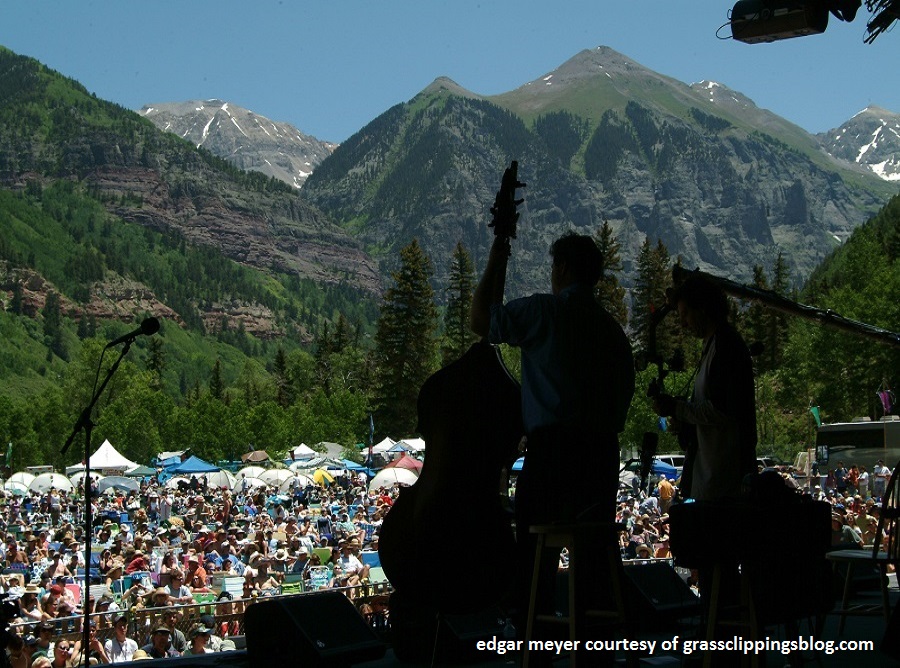 On this, the 40th anniversary year of the Telluride Bluegrass Festival, here is a look back on the creation of the supporting frame of the performance – the Town Park stage. Always a permanent structure in the park, the “new” stage is a back drop for many events in the faraway, high mountain town.

Back in the new-old days of Telluride, before the turn of this century and before the go-go 1990’s, times really were simpler. The design office I apprenticed at then, George Greenbank Architect and Associates, practiced in a rousing shack-of-a-house with miraculous 100 year-old floorboards. There were always-new, stapled layers of pertinent newspaper clippings that also insulated the walls (or fed the wood stoves). Tom “the Mexican” was “on guard”, living upstairs in the loft. GreenBuck Gardens plastic sheet and aspen pole green-houses were out back. And there was lots and lots of fabulous architecture flowing out the doors of that old miner’s home. There must have been 5 or 6 of us drawing in the little place – in the dining room, bedroom, kitchen and back porch. Well, in the winter of ’91 the first Bluegrass Stage that George helped tack together in ’74 was condemned by the town of Telluride (its owner!). George’s office was asked to design a totally new stage – and quick, the show starts in 5 months!

Imagine the possibilities! The illustrious Telluride Bluegrass Stage! This was such an honor! In the Colorado Rockies there are two seasons – winter and the Fourth of July. But in Telluride, back then, there was a vivid third season – June’s BLUEGRASS Festival!

for George Greenbank Architect and Associates

So to realize the possibilities, George had a design charrette in the office. Matt Allen’s design had fabulous timber frames. Sean Kelly’s design (or was it Mike Balser’s?) had grand, shaped and stacked logs. I considered the fleeting time-frame and splinter-thin budget. So I designed the shed you see here.

The stage design is inspired by the true, paired-down, Telluride esthetic. It is reminiscent of the shapes of the mountains, as well as the ancient, simple “welcome shed” at the very entrance to the Telluride town-site. And inspired of course, by the first stage. It even has decorative siding salvaged from the wood of that creation. The new stage had to be very elevated, with space for theater lights much higher, and yet fit under the single-family residential height restrictions per the zoning of the Town Park.

Many interested parties, including Telluride Bluegrass, Inc. (now Planet Bluegrass), Bill Graham Presents (then promoters of the Telluride Rock and Roll Fest and The Grateful Dead), the Telluride Repertory Theater Company and Peter Yarrow of Peter, Paul and Mary all gave their most valuable input. Not all of it conflicting….

And of course, versatility is built-in: the stage hosts many events in the notorious festival town. From Bob Dylan to the String Cheese Incident, dancers, Tibetan Monks, high-lonesome shaman, Shakespeare to “Smelly Jazz”, the list of artists on stage is staggering, so far……The Fred Shellman Memorial Stage is a place for the art of performance. It is itself a wooden, acoustic instrument, usually sitting very quietly in the back corner of the ball fields of Town Park.